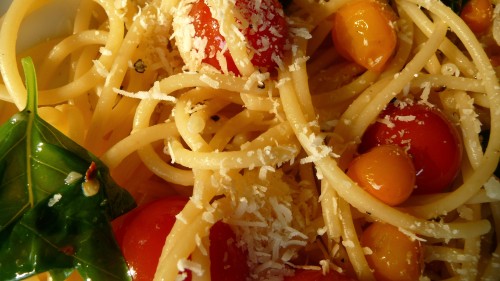 At the risk of being sued by Boy George (as opposed to a-wannabe-lawyer-who-liked-to-bathe-in-apricot-Jell-o), I decided to call this treatment of bucatini with cherry tomatoes “Karma Chameleon” for obvious reasons.  The pure red cherry tomatoes with the vibrant “sungold” cherry tomatoes (from our deck-top garden) and fresh basil (right off the deck, too) made me think of the lyrics:

Huh? What exactly does that mean?

This is from an era of many pop songs with memorable refrains but not much meaning:  the 1980s, of course.  The song was very catchy but did not really have the “deeper” meaning indicated by the references to “karma” and the changeability of the chameleon. There is good alliteration with “karma chameleon” together, while “red, gold, and green” make a nice vivid trio of colours.  But does the song really say anything, other than just being a fun tune?

Like the song, bucatini is a fun pasta. However, it is not always easy to find bucatini in your grocer’s shelves, nestled among its more popular cousins, spaghetti and linguine (do not even try to find “buca-what?” on a small island like this one).  Bucatini is like a drinking straw, with a hollow centre, a kind of tubular spaghetti, which provides, a nice al dente contrast to the warmed cherry tomatoes, and good textural counterpoint to the light olive oil-butter sauce. 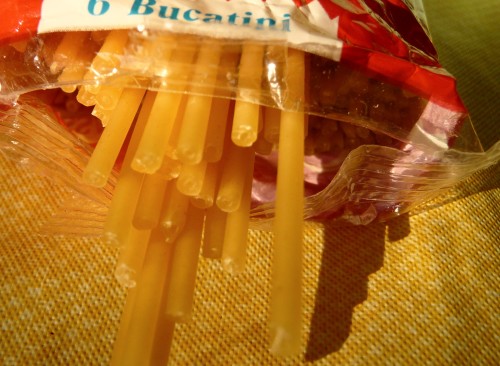 My inspiration for combining bucatini with cherry tomatoes comes from a casual dinner a few years back, hosted by friend and fellow island blogger, Lynn, of Real Food from a Small Island.  Lynn’s sauce was delicious yet somewhat different from this recipe.

I like the classic Italian base of garlic-olive-oil-black-pepper-and-Parmigiano-Reggiano.  This base also can include parsley, bread crumbs, red chili flakes, anchovies, lemon juice, capers, or many other ingredients, depending on the region. time of day, and the chef.  I posted about a combination that I did a few months back, Umami Linguine.  A bit of butter, I find, in a sauce like this helps improve with the mouth feel and adds a bit of richness to the sauce without becoming heavy.

END_OF_DOCUMENT_TOKEN_TO_BE_REPLACED

Where do you stand in the current pie v. cake debate?  I have been noticing that there is a raging controversy regarding the respective merits of each iconic dessert category.

Risking the accusation of being wishy-washy, I refuse to opt for one over the other. I embrace cake for its chocolate, vanilla, mocha, caramel, and similar incarnations (though citrus and other fruit work well in cakes, too).  Pie highlights fresh fruit better, one can argue, yet there are exceptions,  e.g., chocolate cream, butterscotch, chess, and custard pies.

In the summer, I  tend towards pies and their fruit-based cousins, the grunts, slumps, cobblers, crisps, crumbles, pan dowdies, betties, tartes, and gratins (the last two hailing from the French side of the family).  But I will use berries I have picked and frozen for pies and their relatives during the winter.  I have been known to bake a cake or two in the summer for a special occasion.  So a seasonal delineation does not work for the pie v. cake battle in my kitchen, either.

I have always liked the idea of cherry pie, often much more than its reality.  As a child, I ordered it for its redness (my favourite colour) but, since then, I avoid it generally.  If I think there is any chance of a gloppy, gummy, artificially coloured, pre-made red filling, I will opt for another dessert. This is the sad state of cherry pie-dom in North American restaurants and bakeries, I hate to admit.  Pie should be a revelation, not a disappointment.

Sometimes life is just a bowl of sour cherries....

At our Saturday market last, I noticed a basket of gleaming sour cherries:  they were so bright and red and perfect that, on first glance, I thought they were the season’s first cherry tomatoes.  I had not known that our island had any of the sour cherries I had been fantasizing about lately, so I could bake a classic cherry pie.

So having purchased one punnit (or, basket, but I love this technical term), I decided to make a sour cherry pie. Later, I regretted not having bought more.  I needed far more than the eight ounces I had for even the most modest of pie filling recipes – beyond individual tarts, with which I did not want to fuss:  it is summer, after all.  I augmented the sour cherries with four ounces of sweet Lapin cherries I had on hand, from the Okanagan (fruit basket of British Columbia, since you asked). Then I decided on a top-crust only British-style pie I found in A Baker’s Tour, from baking guru, Nick Malgieri.  The juicy red filling I adapted from food-blogger-celebrity-diva, Deb Perelman, of Smitten Kitchen.

(I hope my blog buddy, Jackie, of the hilarious, creative, and informative site,  I Am A Feeder, will comment on this alleged British-top-crust-only pie habit.  This makes me recall the 1970s farce, No Sex Please: We’re British.  Maybe it should have a sequel, No Bottom Crust Please: We’re British.)

For the pie crust and filling recipe… END_OF_DOCUMENT_TOKEN_TO_BE_REPLACED