My Grandmother’s Swiss Roll – A Scrumptious and Retro Dessert: What Would Jessie Dish? Week 19

“So long, farewell, auf wiedersehen, goodbye” – why are these lyrics,  foreshadowing the Von Trapp family’s clever escape into Switzerland from Austria – stuck in my head?  It is due to my grandmother Jessie’s retro Swiss roll, the last of the 19 recipes of hers I discovered earlier this year.

While I vaguely recall a jelly roll – or Swiss roll – my grandmother had made, I associate this more with the commercial, sometimes chocolate-covered, individual “pastries”, filled with all sorts of artificial ingredients.  This recipe has just five staple ingredients (one being the jam for filling), so it really does not have much in common with those preservative-laden “treats”.

Being in a Swiss state of mind, I was pleased to have found photos Jessie took while in the Swiss Alps: 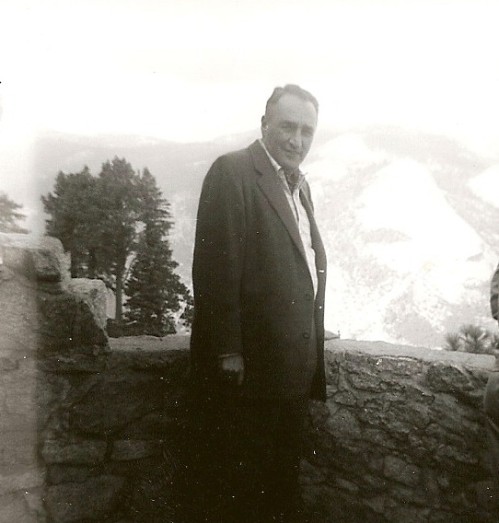 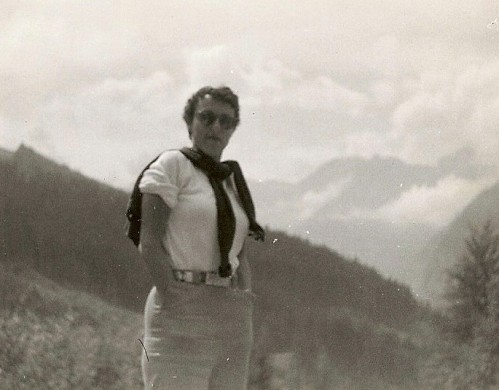 Jessie's daughter, Natalie (my mother) met her parents in the Alps for a visit.

Perhaps Jessie did not take these, but it is odd that she is not in either of them – or any others – and she liked to pose for photos.  My mother was working as a civilian employee of the US army near Stuttgart in the mid-1950s.  On one of their trips to Europe, my grandmother and grandfather decided to check up on my mother, meeting in Switzerland (my grandmother refused to set foot in Germany or Austria after World War II – my last two posts will give you a clue).

However, there is a photo of Jessie dancing in Florida in the 1950s, which I thought went well with this post: 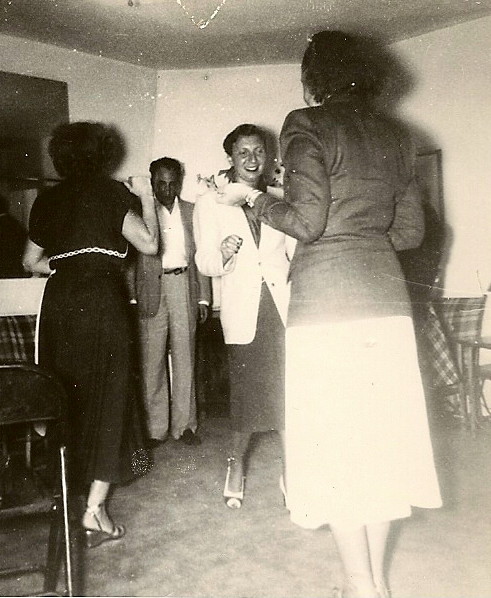 Was Jessie (in white jacket) doing her own Swiss rock-and-roll here?

While this recipe is simple, with few ingredients, it does require attention and meticulousness in preparing the pan and rolling up the cake.  Jessie was very particular and specific about what she liked, so that fits with this recipe well.

It reminds me of a lunch she and I had, right around 1970, not too long after my grandfather had died.  We were at a restaurant near the University of Chicago’s Law School, and it was summer.  My grandmother ordered iced tea.  When it arrived, she sent it back because there wasn’t enough ice:  “You call this iced tea?  It’s barely got any ice!”  Then she sent it back, as there was too much ice:  “What do you expect me to do?  Remove these ice cubes myself?  Why bother going out to eat?” she said to the patient waiter.  Finally, the third time, she said, “Where’s the lemon?  I can’t have iced tea without lemon!”  The frustrated waiter complied, and Jessie had her tea exactly the way she liked it.

For a description of Jessie’s Swiss roll – and the recipe….

END_OF_DOCUMENT_TOKEN_TO_BE_REPLACED

The easiest recipes are often the best.  This four-ingredient recipe, from my grandmother’s recipe files, which I recently discovered, is quick, straightforward, traditional,and toothsome. 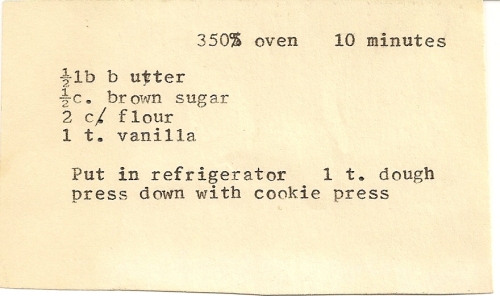 I am a big fan of brown sugar, especially dark or demerara, so I was glad to have found this recipe, among my grandmother’s hand-written and typed cards.  While it is not the brown-sugar-beurre-noisette cookie which ranks among my very favourite cookie recipes, this version is much faster and a classic shortbread or sablé.  I remember well my grandmother’s tubular aluminum cookie press, which made fancy beribboned butter cookies.  I can picture only the plain melt-in-your-mouth white butter cookies, which Jessie often adorned with glacé cherries.

In thinking about brown sugar, I thought about “Bubbling Brown Sugar” and jazz, which Jessie liked.  This led me to think I might find a picture of my grandmother Jessie at the Stork Club in New York City (I remember she had matchbooks from there but no such luck in the photo realm).  At various nightclubs, Jessie liked the many-layered and coloured liqueur drink, the “pousse-café” (she unfortunately pronounced this confection-concoction as “pussy café” – I kid you not…) , with layers of brandy, green chartreuse, white crème de cacao, crème de cassis, yellow chartreuse, and grenadine, as Wikipedia describes one variant, though there were many other versions.  This depends on the specific density of each liqueur to float on top of the previous one.  It was all the rage in the early 20th century. 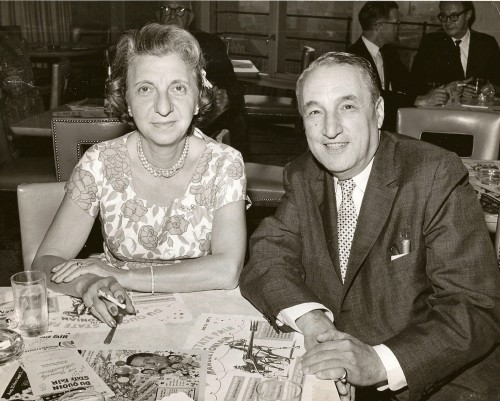 For the description of the cookie and the recipe …

END_OF_DOCUMENT_TOKEN_TO_BE_REPLACED

Posted in Baking, Cookies, Dessert, What Would Jessie Dish

Is rice pudding part of the comfort-food craze?  I have not noticed rice pudding nearly as often on menus, in cookbooks, or in the blogosphere as bread pudding.  Perhaps it is the snob appeal of using brioche, quality challah, or other artisan breads  in bread pudding.  The rice pudding from my late grandmother’s recently discovered files, however, is a classic dish of comfort fare.

I distinctly remember my grandmother’s rice pudding, so I was looking forward to making this recipe.  Rice pudding is a dessert I enjoy and will make, depending on leftover rice, mood,  and other competing dessert priorities.

In 1931 Jessie (with my mother Nat) might have made rice pudding as a Depression-era dessert.

Last time I had made rice pudding, I followed Rick Bayless’s recipe for his Mexican version with cinnamon and lime, Arroz Con Leche, for my Olympic kick-off party (my theme was dishes from Olympic hosts of the past 50 years – Mexico had hosted the 1968 summer  Olympics, and I needed to do something with the four egg yolks leftover from my lemon meringue cookies – a nod to Grenoble, host of the 1968 Winter Olympics).  The Bayless recipe is worth a try for a softer, very cinnamony, lime-zesty pudding.

For the detailed recipe and a critique… END_OF_DOCUMENT_TOKEN_TO_BE_REPLACED