Is rice pudding part of the comfort-food craze?  I have not noticed rice pudding nearly as often on menus, in cookbooks, or in the blogosphere as bread pudding.  Perhaps it is the snob appeal of using brioche, quality challah, or other artisan breads  in bread pudding.  The rice pudding from my late grandmother’s recently discovered files, however, is a classic dish of comfort fare. 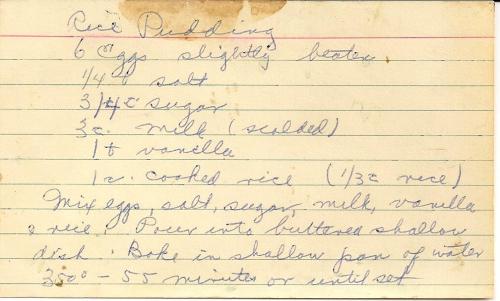 I distinctly remember my grandmother’s rice pudding, so I was looking forward to making this recipe.  Rice pudding is a dessert I enjoy and will make, depending on leftover rice, mood,  and other competing dessert priorities.

In 1931 Jessie (with my mother Nat) might have made rice pudding as a Depression-era dessert.

Last time I had made rice pudding, I followed Rick Bayless’s recipe for his Mexican version with cinnamon and lime, Arroz Con Leche, for my Olympic kick-off party (my theme was dishes from Olympic hosts of the past 50 years – Mexico had hosted the 1968 summer  Olympics, and I needed to do something with the four egg yolks leftover from my lemon meringue cookies – a nod to Grenoble, host of the 1968 Winter Olympics).  The Bayless recipe is worth a try for a softer, very cinnamony, lime-zesty pudding.

For the detailed recipe and a critique… END_OF_DOCUMENT_TOKEN_TO_BE_REPLACED