Do you need a quick yet unusual soup to help you get through the end of winter? Avgolemeno soup, in my abbreviated version, is bright, creamy, and healthful.  It is thick and rich, yet relatively low-fat and easy to make.  This is one of my favourite soups to make during the winter for its simplicity and ingredients, which I regularly stock.

Avgolemono soup is a traditional Greek soup, which requires eggs and lemons for its consistency and lively taste.  While it is generally chicken-based, recipes sometimes call for vegetarian stock or other meat broths.  NB:  I do not agree with the Wikipedia entry for avgolemono soup “invariably” curdling, when refrigerated and reheated; I have not had this happen to me.

I have fond memories of avgolemeno soup from living in “Chicagoland”.  Greater Chicago had such an influx of immigrants in the 19th and 20th centuries that it would make such claims as more Poles than anywhere in the world except for Warsaw and more Greeks than any place outside Athens.  There were many outstanding Greek restaurants throughout Chicago, as well as diners, coffee shops, and other such American-style restaurants run by people of Greek descent.

As my family ate out many times each week while I was growing up, we often had Greek cuisine in “Greektown” as well as eating in Greek-influenced diners.  Avgolemeno (“egg-lemon”) soup was frequently on the menu in the former and the latter, with the name always in English at the diners. Except during my strictest vegetarian years, I always enjoyed avgolemono soup.

George seems to be pondering when spring will arrive.

Any sprouts coming up yet? 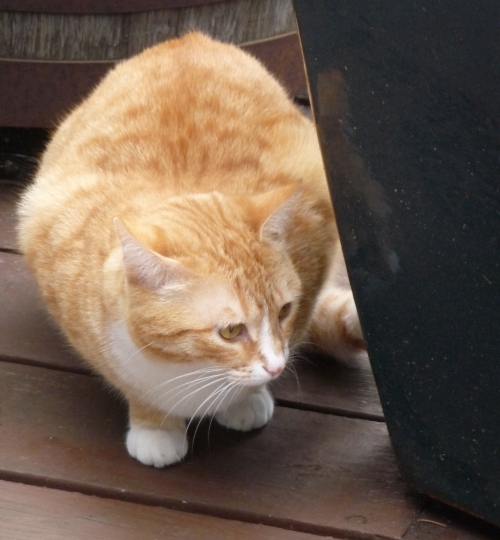 Jinja may be looking around the corner for spring…. 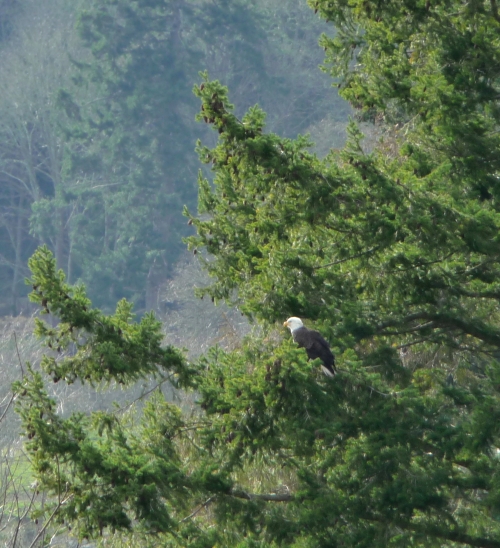 While a bald eagle appears to be contemplating spring nest locations.

For the review – and the recipe

END_OF_DOCUMENT_TOKEN_TO_BE_REPLACED

Is it possible to be excited over spinach-celery-turmeric-lemon soup? For me, the answer is a resounding yes.   This soup is a revelation for its simplicity, satisfying texture, and profound flavour.   When combined with store-bought stock and onion, these four ingredients transform into a deep, rich, and ultra-wholesome soup.

To explain my bizarre journey in finding the recipe, we need to return to its origins.  I was excited to have found a copy of Baroness Claire Macdonald’s Seasonal Cooking a small charity shop in Glasgow, Scotland, in October. A renowned author of many cookbooks, Baroness Macdonald is the Scottish Julia Child, if I dare take such a liberty – though, with her title, does she need anything more?  The Baroness is the chef-owner of the Kinloch Lodge on the Isle of Skye – an inn so well-known that even the New York Times wrote about it as one of the top three dining options on Skye.

While we ate at another one of the three New York Times’ suggestions during our day-long visit to Skye, I later recalled Baroness Macdonald’s name.  Thus, I was able to spot her book on the shelves of a shop benefiting one of the UK’s health charities.  This particular shop was on the main drag of  Sauciehall Street in beautiful downtown Glasgow (like “beautiful downtown Burbank,” for those of you who remember the classic 1960s/1970s comedy show, Rowan and Martin’s Laugh-In).  To borrow the catch-phrase from Laugh-In, Sock-It-To-ME!  It was such a deal for just one quid (slang for one pound sterling, or about $1.50 US) for a classic, which promised 12 months of Scottish cuisine at its finest.

For the soup review, ingredients, and the recipe…