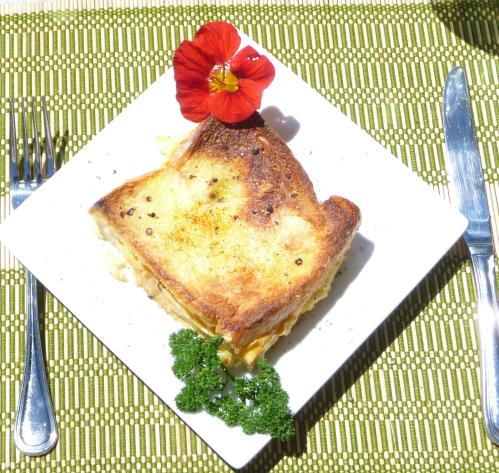 My first impression of the title on the 3” x 5” recipe card was bewilderment.  Soufflé sandwiches?  I could not recall my grandmother, Jessie, ever making such a thing or trucking with soufflés.   Among the recipes of hers, which I had come across, this one really stood out.

First, there is the question of American cheese.  I do admit to being a tiny bit of a food snob.  American cheese processed food product?!?  Are you crazy?  I could only recall having purchased this once, at the behest of my aunt who was going to be in Vancouver, when we still had our house there,  en route to a cruise to Alaska.  My aunt demanded that I stock the American cheese – for calcium, she claimed, to prevent osteoporosis – and a bag of frozen peas, the latter of which were to be applied to her bad knee.

However, I do embrace certain very artificial candies, as childhood favourites, generally seasonal ones:  Peeps at Easter time, candy corn at Halloween, spearmint leaves and cherry sour candies often in December – you get the idea.  Many people I know are appalled by my weakness for this stuff.   Hence, I am not a major food snob.  But do I feel guilty about these things?  Not really.

As for guilt, Jessie was very adept at its practice.  Jessie’s oldest granddaughter, my cousin, sent me a recipe she had received with a letter from our grandmother.  At the time, my cousin was living in Paris:

How can you beat that last line, “Yankee, enough already, COME HOME!” for guilt?  Good thing a decade later, I lived for only a year in Paris or else I might have gotten such strongly worded epistles, too.  In case you were wondering, Jessie lived nearly 19 years after she wrote the piece above. 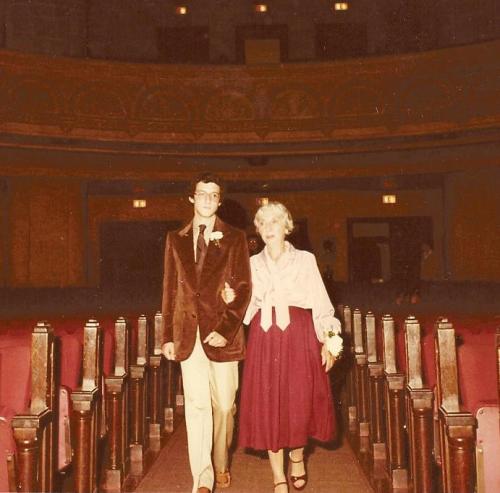 Guilt works, as Jessie and I attended my cousin's wedding in Chicago three years after the letter.

A guilty pleasure could be the soufflé sandwiches, when made with white bread and American cheese.  My first inclination was to substitute fontina or provolone, or the wonderful Canadian Oka cheese; they would melt well with some aged cheddar.  This would have made a creamy yet full-flavoured sandwich.  I also thought about doing a whole-grain bread.  However, I wanted to remain true to the spirit of Jessie’s recipe and avoid guilt.  I could imagine the kind of remark she might have made, e.g., “What?  You’re too good for American cheese now, Mr. Fancy-Pants?” (Jessie might never have used “fancy-pants”, but you get the idea).  Here is a link I discovered for a tempting fancy-pants version of this, if you prefer, from the always reliable and charming Sara Moulton. 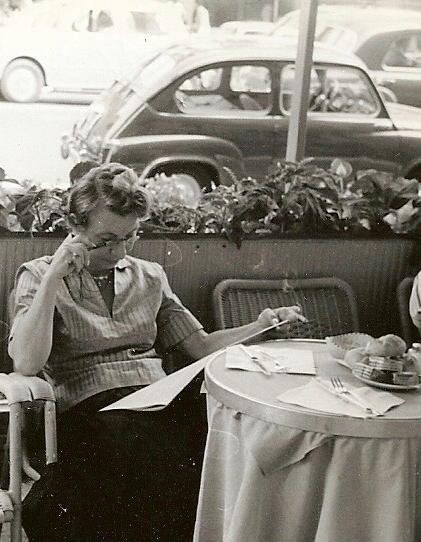 Jessie enjoying a cigarette, guilt-free, on Rome's Via Veneto, in the mid-1950s.

For the soufflé sandwich critique and the recipe…