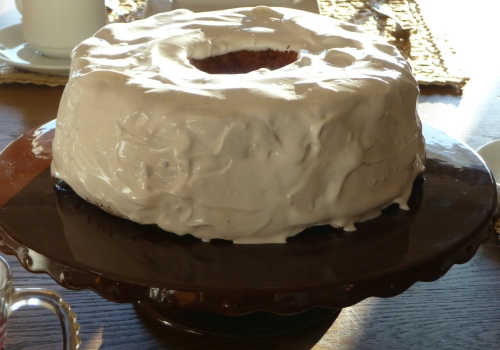 Can a home-made cake be fat-free and flavourful? The cocoa angel food cake proves it is possible, capped off with a fluffy seven-minute-style icing (I used the same frosting as on the chocolate-malt-buttercream cupcakes).

I enjoy a challenge when it comes to baking.  As with the oaty-almond crisps (dairy- and gluten-free), I like to find recipes which suit the dietary requirements without resorting to “fake” baked goods.  Thus, I decided to try my hand at baking an appropriately significant cake for a friend’s landmark birthday, one which required a low-fat dessert. 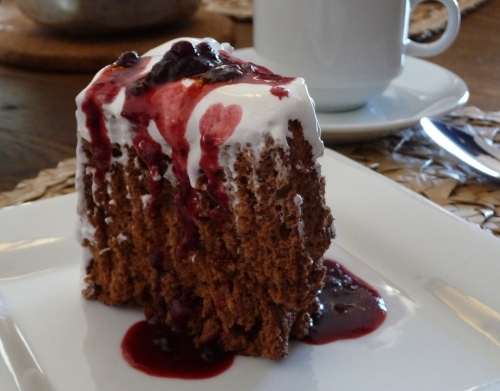 On my island, we have a “free store”, called the “redirectory”. Essentially, the “redirectory” – sounds much more high fallutin’ than “free store –  is like a thrift shop or second-hand store without any costs.  The Gulf Islands do not have municipal garbage pick-up, so people try to recycle, compost, and donate useful items as much as possible, more than in places where there is weekly or daily garbage (and it provides income to the entrepreneurs who haul garbage, off-island, at $5 a large sack).  The theory is that people will donate items in good condition, other than clothes (the one church-run thrift store does that), and those who need something will take it, saving used goods from garbage dumps.

I also had found an antique angel-food-cake slicer, at a vintage shop on a trip to Vachon Island, Washington, last September.  It is an elegant implement, used for angel food or chiffon cakes exclusively, though it is somewhat reminiscent of afro-picks from the 1970s, as a guest pointed out.  What other implement can have such disparate associations and represent fundamentally oppositional eras?  There is the prim-and-proper ladies’ tea – think of the 1920s-1950s heydey of angel food cakes and the newcomer, the chiffon cake. In the 1920s, the angel food’s richer sister, the chiffon cake, had its official coming out as a sassy debutante.  For these two desserts, I picture:  white gloves, white bread sandwiches, white cake, and white ladies, on the one hand.  On the other,  the Afro-pick connotes, for me, big-curly hair, free-love, sex, and drugs and rock-and-roll – from the Summer of Love through the disco era of the 1970s.

For the cake review – and the recipe… END_OF_DOCUMENT_TOKEN_TO_BE_REPLACED

The Anatomy Of A Cupcake 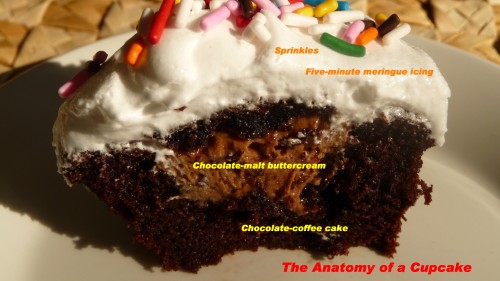 With all the attention to cupcakes of late, there is little on cupcake forensics.  I will dissect a birthday cupcake for you. 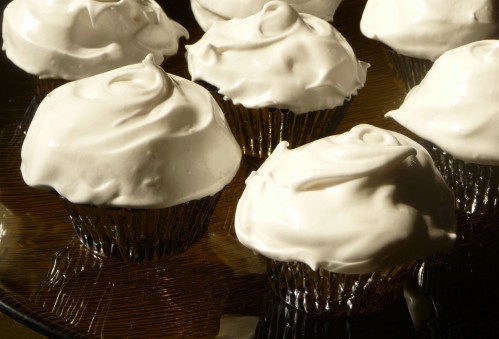 Sometimes, certain recipes, foods, or food combinations, for that matter, get in one’s mind and do not go away.  On the very informative instructional site, A Feast for the Eyes,  I recently had come across Debby’s recipe for Chocolate Bliss Cake.  I really liked the idea of an easy five-minute version of the classic seven-minute meringue icing (thank you, King Arthur Flour, for this simpler version!).  I thought it would go well with Debby’s moist chocolate cake – which included my favourite addition of coffee – and a chocolate buttercream filling.  While I am a big fan of chocolate cake with the icing of the same flavour, the contrast of a light, marshmallowy meringue icing is a treat for both the senses of sight and taste. 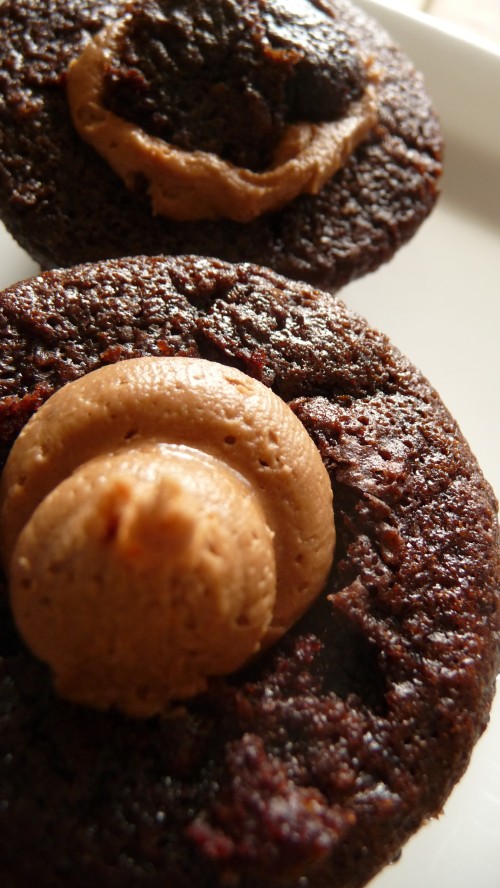 However, I also had been thinking about chocolate malt since I read Geni’s recipe for Chocolate Malt Cake on the engaging blog, Sweet and Crumby.  Chocolate and malt – as in Whoppers, Maltesers (NB:  this site prevents visitors under 12-year-old from exploring these chocolate-malt treats further…), chocolate malted milk balls, or a thick chocolate malted ice cream shake – are an irresistible combination.  Chocolate complements many other ingredients to star in desserts, e.g., coffee, mint, peanut butter, and raspberry, to name a few of my favourites.

If you are a devotee of chocolate malted milk balls, the chocolate-malted buttercream is reminiscent of the crunchy filling, with a different texture, of course.  I found it to be quite addictive, which I must admit, at this point, in this cupcake anatomy lesson. 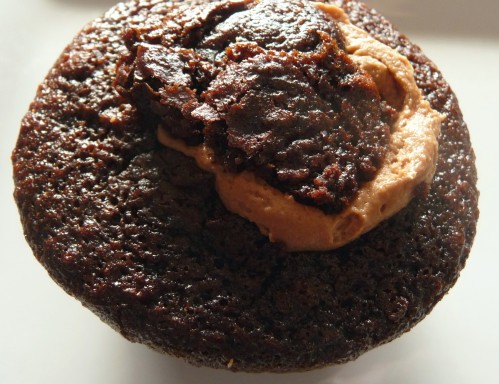 In the  midst of these cravings, my friend Kip happened to mention that it was Jim’s birthday (which I should have remembered as he is precisely 12.5 years older than I am!).  A birthday cake on this island can be a bit of a challenge for those who do not like to bake, as there is one bakery – closed for holidays, at the time – and one baker who makes sumptuous cakes with impressive decorations, which are priced accordingly for major special occasions.  And Kip will be the first to confess to not being a baker, though she is a marvelous cook.   So I told Kip that I would bake something to celebrate.  I wanted it to be visually impressive, as Jim is one of the top professional photographers in Canada! 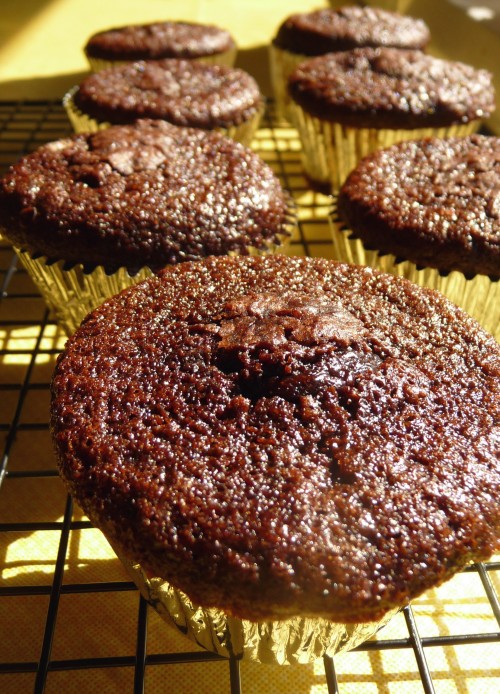 Initially, I had planned to bake a cake, but the image of Hostess cupcakes I had seen in the US recently kept making me think of filled cupcakes, an undertaking I had never attempted before.  As I have been in a more reflective state with my series on my grandmother, Jessie, I was thinking recently of a cupcake from a neighbourhood bakery of my childhood, which was a chocolate cupcake, filled with a white marshmallowy-buttercream centre, and iced with a dark chocolate frosting.  Thus, the Chocolate-Malt-Meringue Bliss Cupcake came into existence.

For the technique and the recipe….