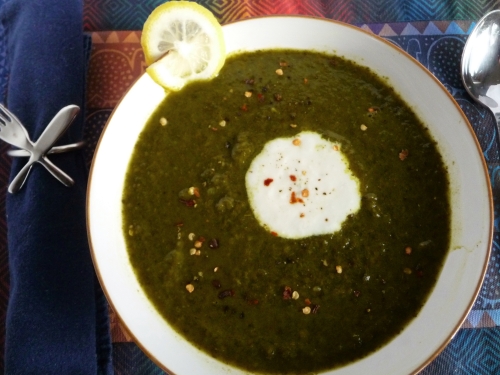 Is it possible to be excited over spinach-celery-turmeric-lemon soup? For me, the answer is a resounding yes.   This soup is a revelation for its simplicity, satisfying texture, and profound flavour.   When combined with store-bought stock and onion, these four ingredients transform into a deep, rich, and ultra-wholesome soup.

To explain my bizarre journey in finding the recipe, we need to return to its origins.  I was excited to have found a copy of Baroness Claire Macdonald’s Seasonal Cooking a small charity shop in Glasgow, Scotland, in October. A renowned author of many cookbooks, Baroness Macdonald is the Scottish Julia Child, if I dare take such a liberty – though, with her title, does she need anything more?  The Baroness is the chef-owner of the Kinloch Lodge on the Isle of Skye – an inn so well-known that even the New York Times wrote about it as one of the top three dining options on Skye.

While we ate at another one of the three New York Times’ suggestions during our day-long visit to Skye, I later recalled Baroness Macdonald’s name.  Thus, I was able to spot her book on the shelves of a shop benefiting one of the UK’s health charities.  This particular shop was on the main drag of  Sauciehall Street in beautiful downtown Glasgow (like “beautiful downtown Burbank,” for those of you who remember the classic 1960s/1970s comedy show, Rowan and Martin’s Laugh-In).  To borrow the catch-phrase from Laugh-In, Sock-It-To-ME!  It was such a deal for just one quid (slang for one pound sterling, or about $1.50 US) for a classic, which promised 12 months of Scottish cuisine at its finest.

For the soup review, ingredients, and the recipe… 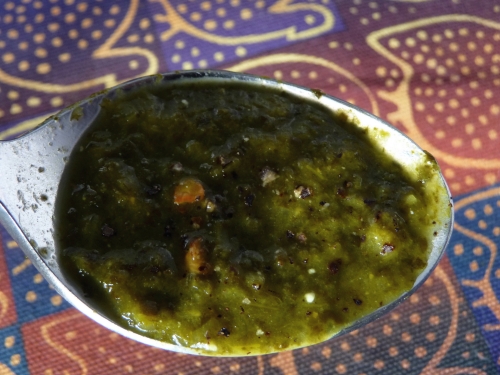 Are you asking yourself, what is so Scottish about this soup? You are right to wonder.  It really is not, except that the Baroness writes that March (the cookbook is divided by months, with appropriate seasonal recipes) is so desolate on Skye that residents need to be resourceful, using pantry staples, canned food, and frozen items.  Hence, the “spinach, turmeric, lemon soup” is a handy starter to make in March.  However, the soup is really Middle Eastern or Indian in flavour and ingredients, with lemon and turmeric.

It becomes a thick, opulent soup, with a texture, complexity, and depth of flavour satisfying enough to serve as a filling lunch or dinner, when accompanied by hearty bread.  The soup could be a nice starter for a wintry brunch, as well.

My substitution of celery, I think, may have improved it, though I really do have to admit to having no basis for comparison.  I made this recipe just once for a quick Friday-night island dinner.  So you can try it either way.

This would be a perfect dish to serve, followed by a rich chocolate dessert, such as a double-chocolate, double-malt iced brownie, to balance the wholesomeness with a bit of decadence, on a blustery wintry evening. Be sure to think of the desolate winters on the Isle of Skye, regardless of where you are. 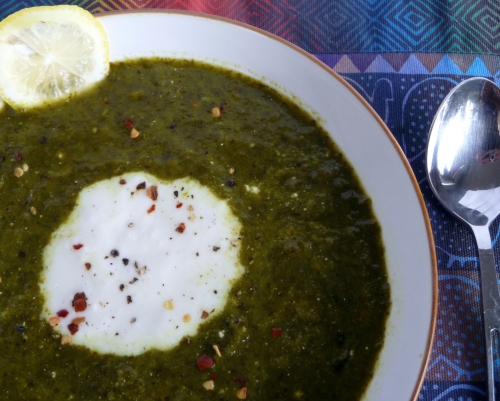 Spinach, Celery, Turmeric, and Lemon Soup, adapted from Baroness Claire Macdonald’s Seasonal Cooking; Serves 6 -8 as a starter, 3-4 as a main

11 responses to “Spinach-Celery-Turmeric-Lemon Soup: A Wee Taste of Scotland?”