The Original Chicago-style Deep-Dish Pizza: Have Yourself a Merry Little Pizza Slice 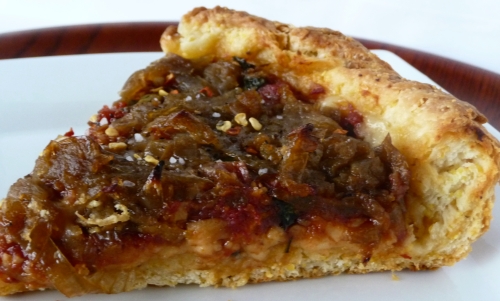 Have you ever tried authentic Chicago pizza?  There are three varieties, in case you were wondering.  I spent my first three decades living within minutes (no more than a half-hour) of the very best pizza parlours in the Greater Metropolitan Chicagoland Area.  I sampled all the top-rated pizza places.  So I feel qualified to “splain” it all to you.

The first is a thin-crust pizza, which is often more chewy and thicker than the New York version (much more crisp and almost cracker-like in consistency); it is most similar to the original Neapolitan pizza crust but is really an American interpretation.  In my youth, I do not remember any authentic wood-burning oven pizzas, comparable to their ancestors in Naples, but today there are many restaurants offering this kind of “real” pizza.

The second is the stuffed pizza.  It has two crusts, akin to a double-crust pie, with all the filling in between. A thin layer of tomato sauce, however, usually adorns the top crust.  This pizza is less common than the one for which Chicago is best known, the deep-dish.  The stuffed pizza can be a delicacy, often made with spinach and mushrooms, or it can be leaden and off-putting disappointment, depending on its maker

I believe the stuffed pizza became popular in the 1970s, a decade not known for its restraint.  After all, wretched excess was in vogue.  Think disco! Think glittery body-clinging polyester fashion!  Think ultra-rich high-fat desserts! It was the era of chocolate decadence cake and appetizer buffets showcasing nothing but cream-cheese dips.  I remember sampling all the varieties at Arnie’s Restaurant in Chicago – chocolate-chip, cinnamon-raisin, honey-walnut, and some savoury counterparts – all cream-cheese extravaganzas.  I assure you I am not hallucinating, due to other 1970s excesses.

In Chicago, the deep-dish pizza is a World-War-II-era invention of Ike Sewell.  Mr. Sewell started Pizzeria Uno around 1943 at Rush and Ohio Streets, on the city’s near north side.  The pizza was an immediate hit.  He opened a second location, named strangely enough, Pizzeria Due, just a block away in 1955.   Both are still vibrant pizzerias.  (Mr. Sewell also introduced upscale Tex-Mex cuisine to the Midwest of the US, where it had been unknown, through his restaurant Su Casa in 1963).

For the deep-dish pizza profile and the recipe

Deep-dish pizza is one of the great defining culinary traditions of Chicago (another being the great Italian beef sandwich, a specialty I recently made, far away from “Chi-town” on my little island – post to follow…).  The crust is like a tycoon – rich and powerful. It has a chewy, buttery bread-like character of substance.  It can require a knife-and-fork for eating, unlike than thin-crust pizzas, which are easy enough to eat with one’ hands.  One or two slices generally will be a full meal, for most people.

The toppings can range from plain cheese-and-tomato to the excessive – by Italian standards – of pizzas with “everything” or “all-dressed”, as we say here in Canada.

I grew up eating the deep-dish of Pizzeria Uno and Due (and not the chain with the same name as the former – I have tried it and found it very different, that is, disappointing and not up to the standard of the original).  During my vegetarian youth, I liked the spinach, mushroom, and garlic version.

While I had good stuffed pizza in May in Chicago, I had another “yen” – as my late grandmother Jessie would have said – for deep-dish pizza.  I had tried one recipe from AllRecipes last year supposedly for Pizzeria Uno’s version.  It was good but not quite up to the Sewell pizza.  Thus, I turned to the stalwart Cook’s Illustrated, or America’s Test Kitchen, for their interpretation.

I really did not adapt much of the recipe, other than adding chili flakes to the sauce (I am sure this is the Pizzeria Uno approach, too) and brushing the crust with olive oil.  My choice of toppings was not strictly Chicago traditional, chorizo on one and caramelized onions on the other. This recipe makes two pizzas, which is good for variety and experimentation.

The crust is very similar to Pizzeria Uno’s, with a buttery flavour, thick and chewy.  It is substantial and satisfying with a decided crunch, thanks to the cornmeal– quite different from the original Neapolitan, of course.  The Cook’s Illustrated recipe for the sauce is true to the Chicago original, though I felt it needed more heat and used the classic chili flakes – often served in shakers in Chicago pizzerias of various stripes as another seasoning besides salt, pepper, and parmesan cheese.

The only warning about the recipe is that the crust is more time-consuming and a bit finicky, compared to making a thin crust.  However, it is worth following the explicit, if rather complicated, directions to produce a wonderful taste of Chicago – wherever you may be.  It is a worthy pizza to enjoy in the midst of Xmas celebrations or any other time you would need a deep-dish experience.

Notes on my adaptations:

27 responses to “The Original Chicago-style Deep-Dish Pizza: Have Yourself a Merry Little Pizza Slice”