What is “Millionaire’s Shortbread”?   I learned of this three-layered bar on a recent trip to Scotland and England.  It is shortbread, naturally, with a middle-layer of caramel, topped with a rich layer of chocolate – rich enough for a millionaire, of course.

For me, it is fitting that this is a Scottish specialty, as I associate Scotland with both shortbread and millionaires (think of JD Rockefeller and Andrew Carnegie, who were 19th-century “Robber Barons” in the US).   This is a dessert sumptuous enough for one of the great Scottish castles, Eilean Donan: 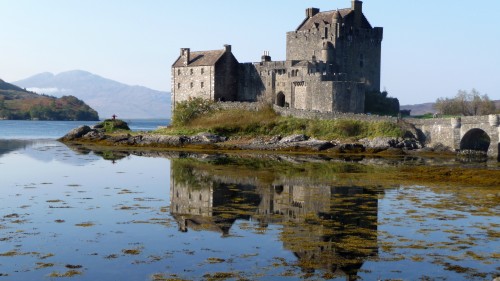 Of course, England is home to many castles and manor houses, too, including Chatsworth, once home to the dashing Deborah, Dowager Duchess of Devonshire:

Even the sheep of Chatsworth are lucky enough to cavort on ancient steps!

But the nearby Haddon Hall still has a very regal Lord Edward Manners (is his daughter Miss Manners?):

Perhaps Lord Manners politely indulged in a millionaire’s shortbread or two in his lower garden:

For the chocolate failure, rescue, and the recipe… 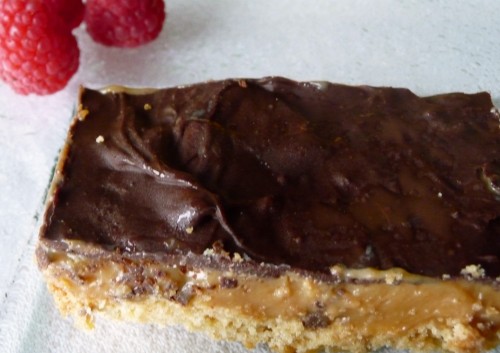 Having sampled millionaire’s shortbread in both England and Scotland, upon our return, I tried a recipe from a free publication I found in Glasgow.  Sue Lawrence was a winner of UK’s  Master Chef, and I was delighted to come across her version of millionaire’s shortbread.  The recipe is easy to prepare, but it does require several hours of inactive time.  Plan accordingly.

Sue wisely takes advantage of the not-so-secret technique of boiling tins of sweetened condensed milk to create a creamy caramel filling.  I had read about this but not tried it previously, so I wondered if it was that easy…yes, it is.

However, I had not such good luck with my chocolate melting.  I rely on the microwave for very little except for making quesadillas (a skill Martha Stewart herself picked up in the “big house” – or, prison – a few years back in West Virginia) and for melting chocolate. 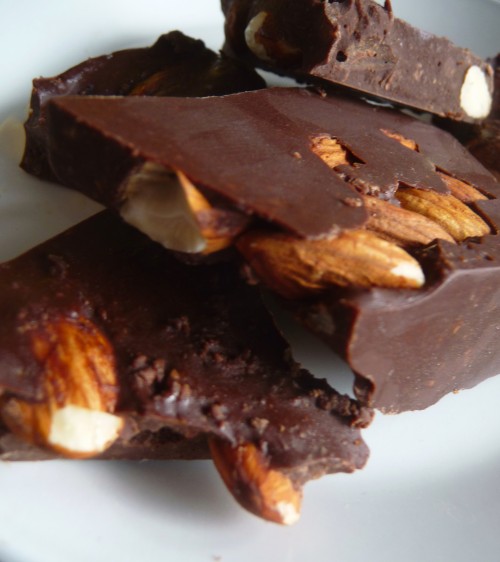 I decided to use milk and semi-sweet chocolate chips for this recipe and not-so-cleverly chose to melt them together in the microwave.  The milk chocolate chips took longer and wound up seizing up, so I decided to salvage the 12 ounces of  chocolate by making almond bark.  Quickly, I added about ¾ of a cup of almonds to the granular chocolate and pressed the mixture into a baking pan (silicone works well for easy removal), and then I refrigerated the almond bark.  Hence, the poor man’s almond bark came about as a by-product of millionaire’s shortbread.  Waste not, want not, as every pull-yourself-up-by-the-bootstraps millionaire might tell you.

This millionaire’ shortbread resulted in a sturdy crust, with a good crunch, to complement the rich creaminess of the caramel filling and the firm toothsome double-chocolate layer.  It is fit for a millionaire or anyone who simply enjoys a triple-threat of treats. 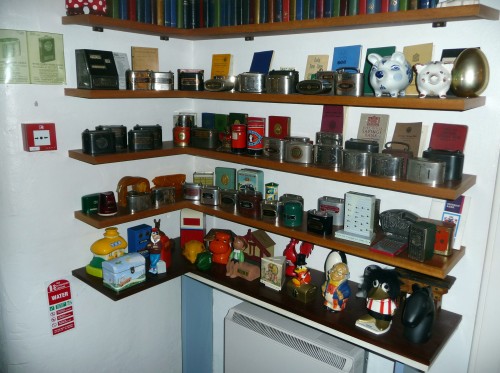 One last note on Jolly-Old-There-Will-Always-Be-An-England is that my blog buddy, Jackie Lee, of “I am a feeder” is the last Brit standing in Project Food Blog.  Watch her very British, informative, and funny video on Thai Prawns with Coconut Milk and Pomelo Salad:  I am a feeder (Vote for her, too, if you please.)

Given the accessibility and price of these ingredients, millionaire’s shortbread is not just for millionaires anymore and can be enjoyed by most people these days.  Indulge and think of life as a millionaire in a castle or a stately country house or else, revel in kitsch of days gone by, as I chose to do: