My Grandmother’s “Pan Cakes” Failure & Success: Neither Pancakes nor “Pan Cakes” – What Would Jessie Dish? Week 15 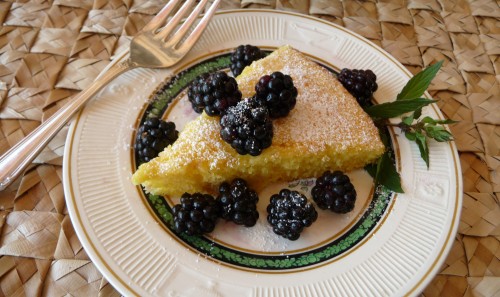 What are “pan cakes” exactly?  My late Grandmother Jessie’s recipe – from her files I discovered this spring – was truly perplexing.  This dish is one I certainly cannot recall ever having eaten.

Like some of my grandmother’s other recipes, this one is not much more than a list of ingredients.  Most confounding for me was the lack of pan size, which might have revealed a bit more, e.g., round versus square or rectangular.  The notes also have provisions for double the recipe.

However, what I found amusing was on reverse of the paper.  It is a recipe from a downtown Los Angeles address.  From a bit of Google-research, I could not find out what was at this address – a newspaper?  Magazine?  Television station?  Initially, I figured it might have been the Los Angeles Times, as my late uncle (Jessie’s son) and my aunt were close friends with the publisher and his wife, which leads me to think that Jessie would have been reading it on a trip to California, perhaps in the 1970s from the typeface used.  The recipe is a confusing one (read the “preparation” section) for some sort of seabass-asparagus terrine.  I think I shall skip trying this recipe, however….

Given the citrus in this recipe, I thought of Jessie and her time spent in Florida, which was far more than her trips to California.  My late grandfather was a sports writer and public relations specialist for sporting events, as I had described in an earlier post, and he covered the dog-racing season in Miami. 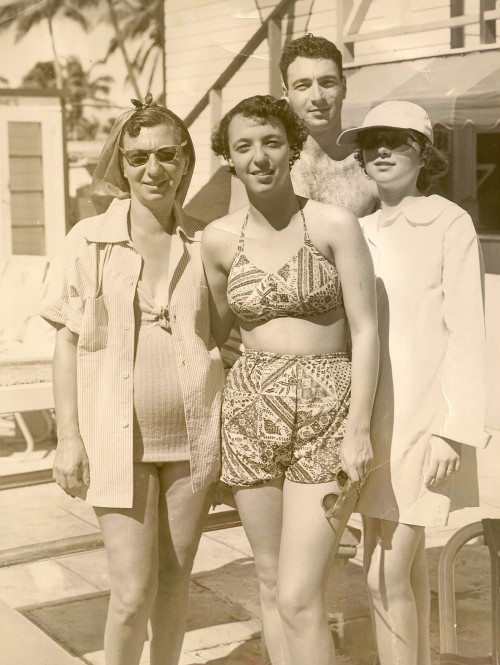 In this photo in Florida in the late 1940s, I suspect my grandfather might have taken the shot of my grandmother, mother, uncle, and my aunt (who had gotten a terrible sunburn and all was covered up here with a jacket and cap, on this visit which was right around the time they had gotten married).

For the cake failure then triumph and the recipe… 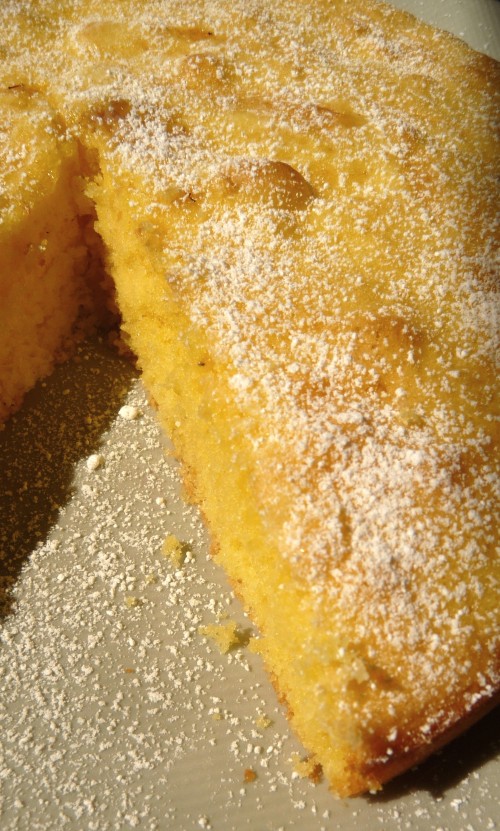 The first try on this cake did not turn out well, as I interpreted the “pan cakes…serves 12” more literally, thinking an eight-inch square pan would make sense.  This initial effort involved a different technique from the recipe below, as I started with the creaming butter and sugar basis for many cakes.  However, this did not help with creating volume or air in the heavy batter, so the first cake came out flat and dull.

Initially, I was going to give up and write a post about this failed effort.  Yet my sense that my grandmother would not have kept a recipe for a thin, flat lifeless “pan cake” made me want to try again.  First, I decided on an eight-inch round pan (which has much smaller area, I calculated with the Pi time the radius-squared, or about 48 square inches in area versus the 64 of the square pan, assuming the same depth – high school geometry continues to serve me well!).  Second, I chose to try the egg-sugar technique, creating more volume and the prized “ribbon” stage in the luxurious golden mixture.  Third, this is a very quick cake to create with a stand mixer, and I had everything easily on hand and ready for a second go.

The second cake turned out very nicely:  much lighter and more delicate in its crumb.  Unlike the sponge cake in last week’s post, this one is more of a quick one-bowl cake, rather than a complicated and more time-consuming “show” cake.  It is a subtle everyday cake, which I served with blackberries, freshly picked from the vines (as ubiquitous as they are on this island, the introduced Himalayan variety does yield wonderful blackberries).

Jessie’s double recipe – though a bit confusing with the amounts not all precisely twice the single version – could be a good basis for a reliable citrus-infused layer cake, filled with custard or jam, and finished with frosting or whipped cream.  I will have to try this in the future.

Persistence does pay-off, as I am sure Jessie would have been the first to say such a thing, and the cake is a fine example of trying and trying again.

11 responses to “My Grandmother’s “Pan Cakes” Failure & Success: Neither Pancakes nor “Pan Cakes” – What Would Jessie Dish? Week 15”