Madeleines – What Would Jessie Dish? Week Eight: Remembrances of Things Past in a Classic Cookie

How apropros is it that my grandmother Jessie’s recently discovered recipe files included a recipe for madeleines?!  I did not make the Proustian connection until I started to write the post, after just having made the cookies.

If you do not recall or might not be into classic French literature, Marcel Proust created A la recherche du temps perdu, inspired by a madeleine he had eaten, dipped in tea.  Memories of his childhood came flooding back – profusely, in his very lengthy remembrance.  Who among us does not have a favourite childhood cookie memory – or seven?

What I liked about this week’s recipe is that I definitely do remember having these cookies at my grandmother’s place.  The madeleines I made turned out to be just as I remember them.  What I cannot figure out, however, is what happened to Jessie’s madeleine pan.  I know I do not have it, nor did my mother (LN D-W, do you?).  Her pan was a very old tin one, without nonstick coating.  My miniature madeleine pan is nonstick and comes from France (via West Vancouver, BC) .  The mini-madeleines (“mini-Maddies”??) stick, though,  far more than the much cheaper large nonstick version.   The large one I picked up – brand new – at a small-town flea market between Savannah, Georgia, and Charleston, South Carolina, a few years ago. 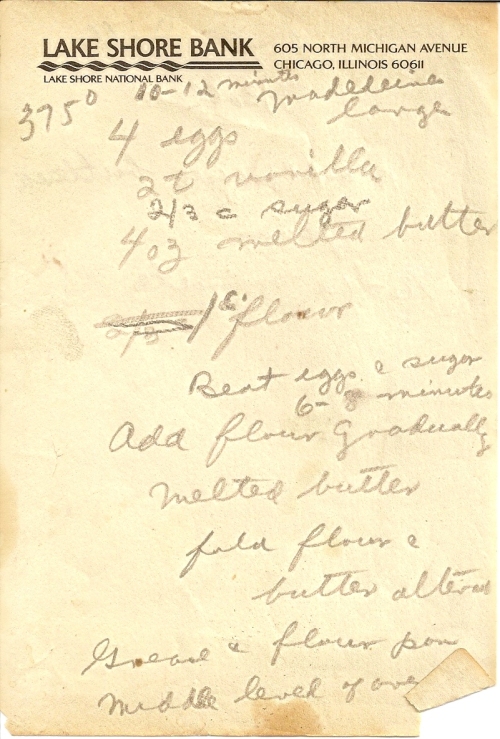 The recipe itself included a twist, as the madeleine is close enough to a basic génoise to double as a “jelly-roll” cake, which Jessie indicated on the reverse of the recipe.  One other aspect of the letterhead that is interesting (to me) is the bank’s logo with a very 1970s typeface and look; this is when Jessie had moved to the north side of Chicago from the south side and opened an account at this bank.  Yet I do know that she made these cookies decades prior to the 1970s.  Jessie’s pan probably was from the 1940s. 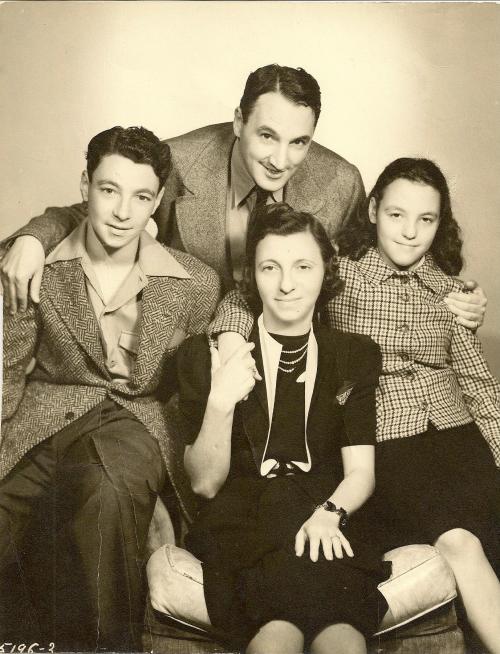 Always in fashion, Jessie and her family (ca. 1940) liked their desserts a la mode, too.

I also like the fact that the madeleine is a classic French cookie, and my grandmother was a bit of a Francophile.   Jessie loved to shop and thought Paris was a great city for women’s shopping, she wrote to tell me when I lived in France’s capital.  In the same aerogram, she indicated that London was better for men, when it came to shopping – my grandfather had suits and shoes made there – while Paris was superior for women’s wear.  I myself never had any trouble in either city shopping for men’s wear! (I devoted far more attention to bakeries in Paris than pursuing fashion).

Jessie's precise directions result in a ribbon of the egg-sugar mixture.

What I liked about Jessie’s recipe is that it is accurate (the time for beating the eggs and sugar alone was a great guide to achieving the ribbon stage, in my preparation), versatile (big and small madeleines as well as the jellyroll option), and yields a good number:  I made two dozen large cookies and 40 miniatures.

For the madeline recipe with updates…

The cookie itself is very light and moist but not too wet, with a strong vanilla note.  In short, it is a fine example of the classic biscuit français.  The proportions of the recipe vary from other madeleine recipes I have made (e.g., more eggs, less butter, less sugar), yet the result is light, springy, and tender, with plenty of flavour.  Channeling Jessie, I served the madeleines on a plate of hers, a classic blue-and-white Wedgwood dish before I realized the irony of a cookie emblematic of France on china, which is quintessentially British.  Jessie would not have cared about that international rivalry, I am sure.

This cookie is in keeping with Jessie’s love of baking, sweets, and France – not to mention its usefulness in prompting memories and a joy to savour, so this madeleine is a multi-purpose wonder.

17 responses to “Madeleines – What Would Jessie Dish? Week Eight: Remembrances of Things Past in a Classic Cookie”