As I had mentioned earlier, I started to learn about different cuisines during my vegetarian childhood. One cuisine, which is arguably the best for vegetarians, is Indian, of course. Palak (or saag) paneer became one of my favourite dishes – among all cuisines – as well as my particular litmus test for Indian restaurants; none I have eaten in even the best restaurants, however, can compare to my friend Kip’s stellar version. 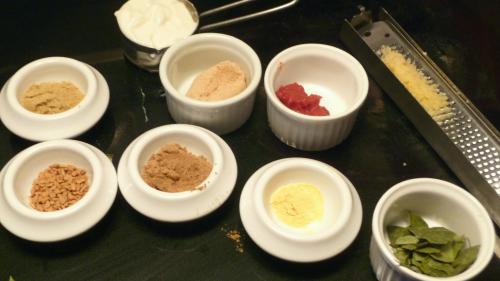 Indian food now is very popular around the world, but its complexity and variety is often misunderstood. Just like Chinese, Mexican, or American cuisines, Indian regional cooking represents a mind-numbing array of varied dishes from the Goan vindaloo to Rajasthani buttermilk soup to the crisp crepe-like dosas of southern Indian to Punjabi tomato-based curries. I guess it is similar to lumping New England clam chowder, Chicago pan pizza, Louisiana crawfish etouffee, and a French dip sandwich in Los Angeles as one coherent “American” cuisine – not to mention Peeps, candy corn, Twinkies (which were invented right near where I grew up!), and other uniquely food items, which add to the range of eatin’ in the US of A.

Vancouver’s own Bal Arneson published Everyday Indian just last year. This book is a marvelous resource for simple, approachable dishes for neophytes to Indian cooking. Bal has drawn from cuisines throughout India, intelligently adapting them for kitchens in North America and elsewhere. It is a useful and versatile guide to India’s diverse cuisines, with lush food styling by Tracy Kusiewicz, who – for full disclosure – also happens to be a friend-of-a-friend (OK, that should be “FOF”, for those of you text, Tweet, and type, generally live in abbreviations).

So, armed with the admirable debut cookbook by Bal (an Xmas gift from my sweetie), I made a few slight revisions to her halibut masala for a recent Sunday dinner. The result was a piquant, complex dish, which allowed the elegant halibut to revel in its masala sauce yet somehow not be overwhelmed by the mighty masala. Given that it means “mixture”, masala is a great place to start in exploring the rich mix of Indian cuisines, and masala certainly mixes and marries well with halibut in this particular dish.

Halibut bathed in rich masala is ready to bake

Directions
Preheat the oven to 350°F.

Place the fish in the pan and spoon sauce over and around the fish. Bake in preheated oven until the halibut is cooked through, about 15-20 minutes, until the fish just begins to flake, when a fork is inserted. Serve over rice.

Jinja is Bislama for "ginger", essential to masala

Jinja’s name in Bislama means “ginger”, which is essential to masala!