The pancake is perfect with lingonberries on top.

To borrow the punch line from a popular joke, my mother’s favourite thing to make for dinner was reservations. While she did make a number of dishes well, she never enjoyed cooking or baking. However, we always looked forward to her fluffy golden pancake, which we called a “German pancake”. The main reasons my mother made it were its easy preparation and its simplicity: five basic ingredients – eggs, milk, flour, sugar, and butter – with nutmeg, confectioner’s sugar, and lemon juice as optional enhancements.

In fact, I think this pancake – which puffs up remarkably then deflates just as dramatically – was the only brunch dish we had at home on Sunday. We always ate it with bacon and lingonberry preserves (if you have no Scandinavian specialty stores nearby, IKEA generally carries it, at a very reasonable price). Both are fine accompaniments for such an impressive yet simple brunch dish. The tangy lingonberries complement the eggy-yet-crisp pancake; by now, we should all know that everything is better with bacon. 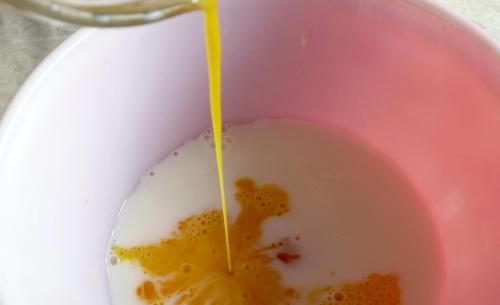 Mixing the pancake only takes a few minutes.

Years later, I came across the recipe in Craig Claiborne’s memoirs-with-recipes, A Feast Made For Laughter. This book, by the way, is well worth reading, for his tales of challenges in his own life growing up as well as the recipes. Mr. Claibrone’s work was sort of a food-blog-before-food-blogs, in a way. So A Feast Made For Laughter is an interesting read, from that perspective of foodblogs as well as an opportunity to learn more about a major American force in cuisine in the 20th century.

I recall that my mother did find the recipe in Craig Clainborne’s feature in The New York Times. Mr. Claiborne called it, “David Eyre’s Pancake”. I did not know of the other name until I read the engaging memoir. Call this dish what you like, to adapt an old adage, but I call it the height of pancakeness (pancakery?).

Whether or not you read A Feast Made For Laughter, at least try the pancake. It is a recipe, which will make reservations unnecessary for your next weekend brunch. 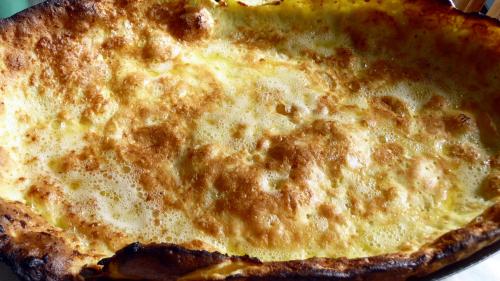 Fresh from the oven, the pancake has just deflated.

Preheat oven to 425 degrees. In a mixing bowl, whisk together the milk, eggs, flour, and tablespoon of sugar. Melt the butter in a 12-inch skillet or ovenproof dish, top with nutmeg. Pour the batter into the pan or dish and bake for 20 minutes or until the pancake puffs up and turns golden brown. Sprinkle with the confectioner’s sugar and lemon juice. Watch it quickly deflate! Return to broiler for a minute or two. Serve immediately with jam, jelly, or preserves – preferably lingonberries. This will serve two as a main course, four as a side dish, or just one, who really likes pancakes or has been working hard on a food blog….

This entry was posted in Brunch, Recipes Misc and tagged Brunch, Pancakes. Bookmark the permalink.